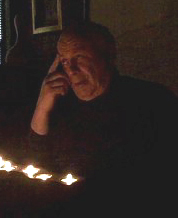 "Because of YOU and my volunteers who help to produce the Crystal Quantum Radio Amulets and Super Beacons, I now have the time to devote to lab experimentation and development.

"On the evening of November 11th, 2009, I was given a vision of three different circuits that I was told to build:

"The First Circuit found paranormal phenomena, meaning it made the user more aware of paranormal events and entities around them. This circuit I was told is called the "Ghost Hunter". This could be used to sensitize Ghost Hunters who are seeking Lost or Trapped Souls on Planet Earth.

"The Second Circuit has the effect of drawing paranormal phenomena to itself. This I was told to call this the "Ghost Magnet". It can be made as both a box and an amulet, and is potentially the most powerful tool and ally to be used by a Ghost Hunter. It can also be used to create a Haunted House out of an ordinary dwelling, opening the house to visiting spirits for the purpose of seances and to offer help to Trapped Souls who need assistance in moving on ...

"The Third Circuit opens a Portal to Trapped Souls and makes it easier for them to Move On to Higher Realms. It is not a "banisher" -- its effect is gentle and non-aggressive, comforting and soothing and supportive for the Trapped Soul, making Moving On easier to accept. I was told to call this circuit the "Ghost-B-Gone".

"I am very pleased and excited to offer them. The circuit visions are a direct result of my work with the Super Beacon and the Super Portal Amulet. My thanks to all my friends for helping make this possible for the Benefit of All Beings Everywhere.

"I will post the new Quantum Tools as soon as I am able to get them up on the internet."