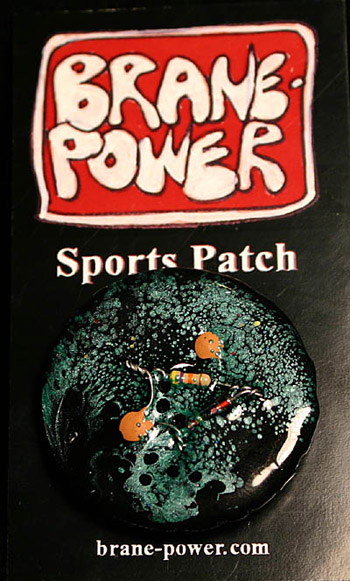 The Sports Patch gets you into THE ZONE with radiowave Beta-Blocking meditation power!

Improve your game: The Sports Patch gets you into THE ZONE with radiowave Beta-Blocking meditation power!

Here's what inventor E.J. Gold says about the Sports Patch:

Due to yet another incredible breakthrough in Beta-Blocker technology, I've introduced a ZONE type sports patch. I'll explain how they work.

In order to understand the function of a BRANE-POWER SPORTS PATCH, you need to know a few fundamental facts about radio waves and meditation in "THE ZONE".

Hello,
I just wanted to comment that the sports patch has been working very well. When I play a sport it helps me to focus without tensing up which results in better performance overall. I'm able to hit the ball with better accuracy and helps me to stay composed when things don't go right. I've also been doing some of those orbs as well and they seem to be working really well. Pretty amazing stuff.

When you're driving between towns, out in open country, and you tune your analog AM radio, you're bound to pass through frequencies between stations, and that's where you'll hear some fuzzy crackling sound called "static".

If you ask most people what radio static is, they'll say "nothing", but it's far from "nothing". Static contains the most important natural broadcast radio waves in the universe, that of the "Big Bang" itself, the exact moment of Creation!

It's the actual SOUND OF CREATION which sets the whole works in motion in an infinite expansion of space and time, and that's what we're going to hook up to in order to get you into THE ZONE.

Harmonics are the key. Just like a pair of tuning forks, you can get a second tuning fork to vibrate by striking the first one and holding it near the second, and that's the powerful radio frequency force we tune into for the BRANE- POWER SPORTS PATCH.

But what have radio waves got to do with sports? First of all, meditation gets you into "THE ZONE", speeding up your perceptual sample rate like a high- speed film of a hummingbird which, in effect, seems to slow down time itself.

Secondly, the ZONE type of meditation keeps you CALM, COOL AND CLEAR. If you're a golfer under pressure to keep your score nice and low, or a bicycle rider who needs to keep balance and intuition high, you'll know how important it is to keep your cool.

And if you're a pool or billiards player, swimmer, hunter or tennis player, you'll want to take advantage of the CLARITY factor, which helps you to stabilize your breathing like a yoga master without the years of practice it would normally take you to acquire the skill.

When you're free from worry and the pressure of competition, you just plain DO BETTER, and that's what THE ZONE is all about ... staying above the action, in a space where you're in total control without that heavy drain that comes from overwhelm and panic.

I'm so sure that you'll be amazed by the BRANE-POWER ZONE SPORTS PATCH that it is 100% GUARANTEED to improve your sports experience or YOUR MONEY BACK!

About the Sports Patch: