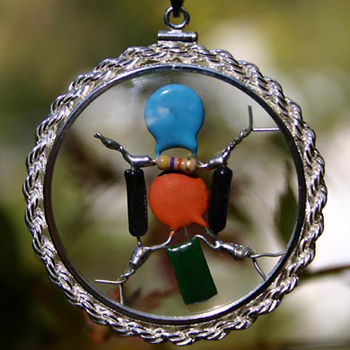 This is the one worn by Yanesh and is her favorite.

"Composing music is easier since getting the double-black, and my playing has more focus and power to it. Composing is a more intuitive, unfolding process now -- allowing a piece of music to almost write itself instead of trying to do it with the analytical mind. There are much deeper and more inspired intelligences, even though the analytical mind usually doesn't 'see' them, or even conceive of them. -- G.W., Cork, Ireland

"This is really starting to get very interesting! I have more energy and positive purpose than I have had in over a decade!" -- MM, Denmark

"I just wanted to let you know that I received the Black Diode Ammy 2 weeks ago, and I have been using it every day since then, with incredible results! Being a Theta Healing Practioner, using mostly theta and delta brainwaves through a meditational technique, I have found that whenever I wear the Black Diode Ammy, my connection with the Divine is crystal clear, which is a huge bonus and advantage." -- B.N., Norway

"One thing I found about wearing the Double Black Ammy is the profound energy it puts through me. My wife discovered that earlier a few days back. When I am at work with this Double Black it is like I am speed all day long but when work is over I am exhausted. On thing for certain -- I can't sleep with the Double Black, at least for now. I can say this much -- everyone who sees it loves the way it looks." -- D.B., Princeton, NJ

"I am having a lot of fun with my black diode amulet, and my connection with the Divine is getting clearer and clearer each and every day. I now have a crystal clear connection even when I am not wearing it. I have also noticed that after I received the Black Diode Ammy, that I have been able to smile and be happy even in the midst of conflict and turmoil. I smile a lot more than I used to, almost all the time :-) And I have also noticed that conflicting situations usually resolve almost automatically by themselves, without me having to do anything. This has never happened before, but now it happens all the time, which is absolutely great!" -- B.N., Therapist, Norway

"In all the years that we have been playing in the fields of evolution, we have never seen devices like these. Absolutely everyone who puts one on feels it and wants one. Pretty awesome." -- Jan H., Santa Clara, CA

"My girlfriend has been noticing how calming the Double Black is. She had to do a lot of running around today and said it really helped her stay calm, slowed her mind down and not feel stressed." -- Se D., Vancouver, BC