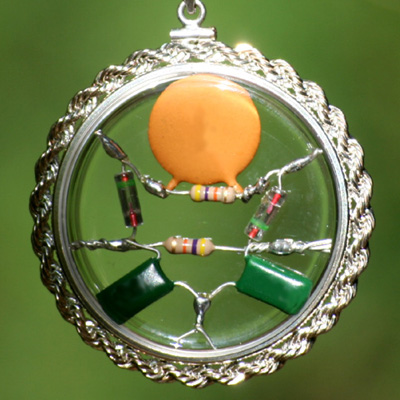 The Translator helps to understand angelic messages, communications from the higher self, your guides, and it helps in channeling. This is the vertical aspect - between the higher and lower vibrational realms. It also works horizontally - around you, on this level and this reality.

The minute I read about this one I knew I had to have it. The minute I put it on there was a shift. No, not The Shift; rather, a soundless but palpable shift where I found myself .hearing. things that were silent. It first happened in the garden. There I was, in the dirt, on my knees, trowel in hand when suddenly I was holding my breath to better hear the voices all around me. I will never again doubt the sentience of flora! Or the presence of Flora. And you know what else? I returned to that garden four months later and, again on my knees in the dirt I heard them, clamoring for my attention because they remembered me back! Such a treasured gift! And that ain.t all..
-- G.P. ~ Graphic Designer